Around Edwards Island there are twelve buried notes left by Maggie Adler explaining the truth about the USS Kanaloa and the island itself.

Associated with the twelve buried Adler Notes, there are twelve hints relayed by Maggie via the old Cardinal Station, 140.1. 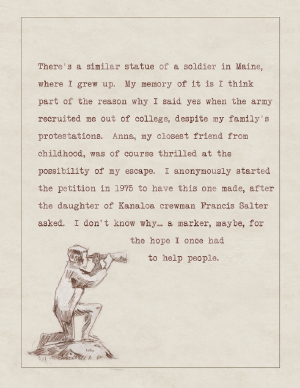 There's a similar statue of a soldier in Maine, where I grew up. My memory of it is I think part of the reason why I said yes when the army recruited me out of college, despite my family's protestations. Anna, my closest friend from childhood, was of course thrilled at the possibility of my escape. I anonymously started the petition in 1975 to have this one made, after the daughter of Kanaloa crewman Francis Salter asked. I don't know why... a marker, maybe, for the hope I once had to help people.

Location: Epiphany Fields - at the foot of the lighthouse. 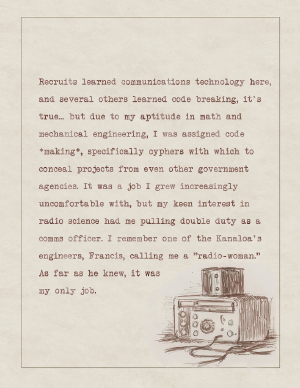 Recruits learned communications technology here, and several others learned code breaking, it's true... but due to my aptitude in math and mechanical engineering, I was assigned code *making*, specifically cyphers with which to conceal projects from even other government agencies. It was a job I grew increasingly uncomfortable with, but my keen interest in radio science had me pulling double duty as a comms officer. I remember one of the Kanaloa's engineers, Francis, calling me a "radio-woman." As far as he knew, it was my only job.

Location: Milner Outpost - at the foot of the tower. 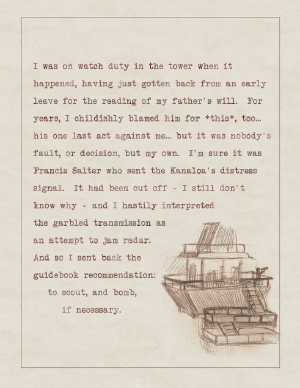 I was on watch duty in the tower when it happened, having just gotten back from an early leave for the reading of my father's will. For years, I childishly blamed him for *this*, too... his one last act against me... but it was nobody's fault, or decision, but my own. I'm sure it was Francis Salter who sent the Kanaloa's distress signal. It had been cut off - I still don't know why - and I hastily interpreted the garbled transmission as an attempt to jam radar. And so I sent back the guidebook recommendation: to scout, and bomb, if necessary. 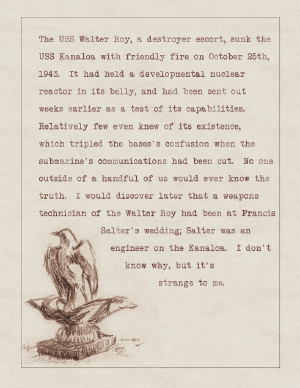 The USS Walter Roy, a destroyer escort, sunk the USS Kanaloa with friendly fire on October 25th, 1943. It had held a developmental nuclear reactor in its belly, and had been sent out weeks earlier as a test of its capabilities. Relatively few even knew of its existence, which tripled the bases's confusion when the submarine's communications had been cut. No one outside of a handful of us would ever know the truth. I would discover later that a weapons technician of the Walter Roy had been at Francis Salter's wedding; Salter was an engineer on the Kanaloa. I don't know why, but it's strange to me.

Location: Main Street - in the alley beside the antique store. 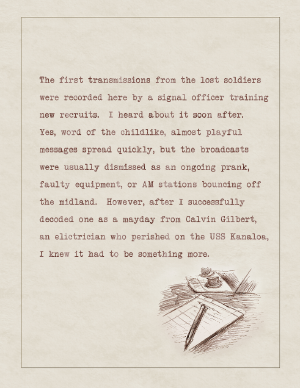 The first transmissions from the lost soldiers were recorded here by a signal officer training new recruits. I heard about it soon after. Yes, word of the childlike, almost playful messages spread quickly, but the broadcasts were usually dismissed as an ongoing prank, faulty equipment, or AM stations bouncing off the midland. However, after I successfully decoded one as a mayday from Calvin Gilbert, an electrician who perished on the USS Kanaloa, I knew it had to be something more.

Location: Facilities - near the beds on the lower level ("sleep"). 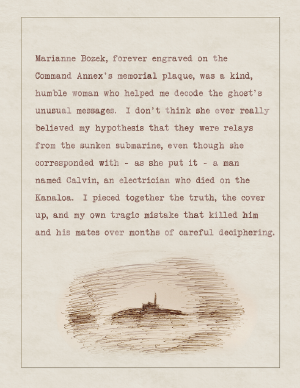 Marianne Bozek, forever engraved on the Command Annex's memorial plaque, was a kind, humble woman who helped me decode the ghost's unusual messages. I don't think she ever really believed my hypothesis that they were relays from the sunken submarine, even though she corresponded with - as she put it - a man named Calvin, an electrician who died on the Kanaloa. I pieced together the truth, the cover up, and my own tragic mistake that killed him and his mates over months of careful deciphering.

Location Clue: "At the top of the hill, in the--Charlie, Oscar, Lima, Oscar, Romeo, Echo, Delta--field." 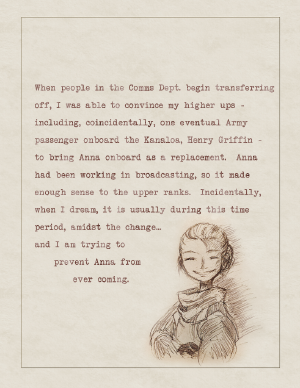 When people in the Comms Dept. begin transferring off, I was able to convince my higher ups - including, coincidentally, one eventual Army passenger onboard the Kanaloa, Henry Griffin - to bring Anna onboard as a replacement. Anna had been working in broadcasting, so it made enough sense to the upper ranks. Incidentally, when I dream, it is usually during this time period, amidst the change... and I am trying to prevent Anna from ever coming.

Location: US Army RCS - under the "guide" (signpost). 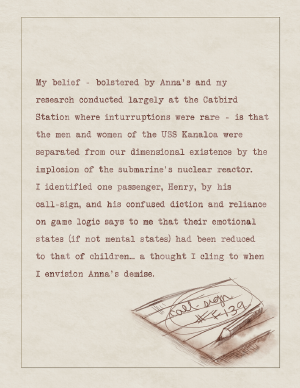 My belief - bolstered by Anna's and my research conducted largely at the Catbird Station where interruptions were rare - is that the men and women of the USS Kanaloa were separated from our dimensional existence by the implosion of the submarine's nuclear reactor. I identified one passenger, Henry, by his call-sign, and his confused diction and reliance on game logic says to me that their emotional states (if not mental states) had been reduced to that of children... a thought I cling to when I envision Anna's demise.

Location: Bridge Stand - near the graves to the far left under the stone bridge. 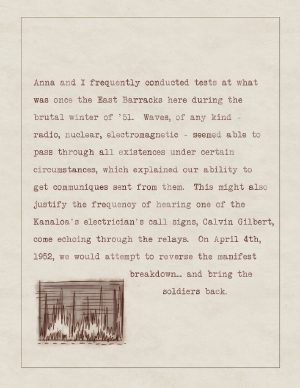 Anna and I frequently conducted tests at what was once the East Barracks here during the brutal winter of '51. Waves, of any kind - radio, nuclear, electromagnetic - seemed able to pass through all existences under certain circumstances, which explained our ability to get communiques sent from them. This might also justify the frequency of hearing one of the Kanaloa's electrician's call signs, Calvin Gilbert, come echoing through the relays. On April 4th, 1952, we would attempt to reverse the manifest breakdown... and bring the soldiers back.

Location Clue: "A fine stop for a view at the cliff's--Lima, Echo, Foxtrot, Tango--edge."

Location: Campgrounds - near the stone ruins at the top left edge. 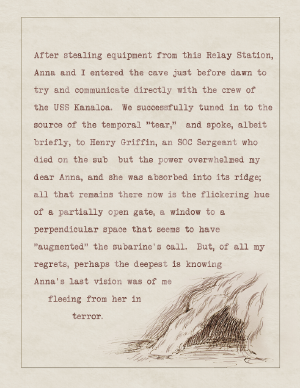 After stealing equipment from this Relay Station, Anna and I entered the cave just before dawn to try and communicate directly with the crew of the USS Kanaloa. We successfully tuned in to the source of the temporal "tear," and spoke, albeit briefly, to Henry Griffin, an SOC Sergeant who died on the sub, but the power overwhelmed my dear Anna, and she was absorbed into its ridge; all that remains there now is the flickering hue of a partially open gate, a window to a perpendicular space that seems to have "augmented" the subarine's call. But, of all my regrets, perhaps the deepest is knowing Anna's last vision was of me fleeing from her in terror.

Location: Relay Point - on the ground beside the Wishing Well. 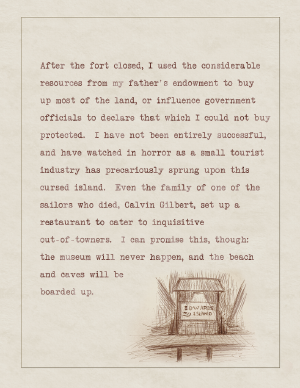 After the fort closed, I used the considerable resources from my father's endowment to buy up most of the land, or influence government officials to declare that which I could not buy protected. I have not been entirely successful, and have watched in horror as a small tourist industry has precariously sprung upon this cursed island. Even the family of one of the sailors who died, Calvin Gilbert, set up a restaurant to cater to inquisitive out-of-towners. I can promise this, though: the museum will never happen, and the beach and caves will be boarded up.

Location Clue: "A fallen--Tango, Romeo, Echo, Echo--now called something else."

Location: Towhee Woods - by the log (fallen tree) on the lower east side. 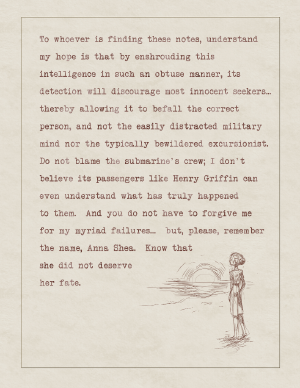 To whoever is finding these notes, understand my hope is that by enshrouding this intelligence in such an obtuse manner, its detection will discourage most innocent seekers... thereby allowing it to befall the correct person, and not the easily distracted military mind nor the typically bewildered excursionist. Do not blame the submarine's crew; I don't believe its passengers like Henry Griffin can even understand what has truly happened to them. And you do not have to forgive me for my myriad failures... but, please, remember the name, Anna Shea. Know that she did not deserve her fate.

Location: Beacon Beach - beside the bottom of the stairs near the cave entrance. 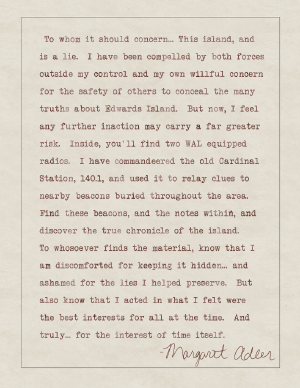 To whom it should concern... This island, and [and it's history] is a lie. I have been compelled by both forces outside my control and my own willful concern for the safety of others to conceal the many truths about Edwards Island. But now, I feel any further inaction may carry a far greater risk. Inside, you'll find two WAL equipped radios. I have commandeered the old Cardinal Station, 140.1, and used it to relay clues to nearby beacons buried throughout the area. Find these beacons, and the notes within, and discover the true chronicle of the island. To whosoever finds the material, know that I am discomforted for keeping it hidden... and ashamed for the lies I helped preserve. But also know that I acted in what I felt were the best interests for all at the time. And truly... for the interest of time itself.
- Margaret Adler

Location: Main Street - in the office (retrieved via story progression).