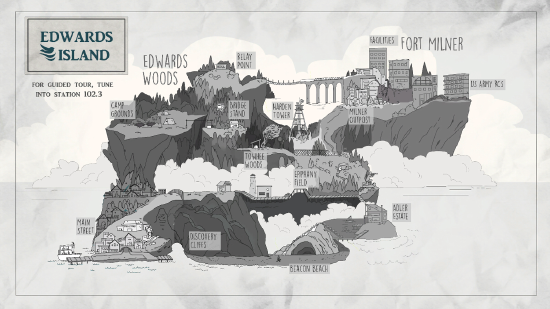 Edwards Island is the main setting of Oxenfree. It is known for being the birthplace of many radio innovations, as well as the sinking of the USS Kanaloa.

The island extensively uses "Wave-Assisted-Locks", or "WAL" for short, in which radio signals can be used to unlock doors.

Informational plaques located throughout the island provide information about the history of the island and its landmarks by tuning into the guided tour station.

An ex-military base turned tourist trap, Edwards Island boasts a rich history. Briefly mentioned by Ren, the island was originally used for ranching. This occurred when the island was first found by Portuguese explorers. The island was later given to colonel Caleb Edwards, who rented the land out to mining companies. When Edwards died, the government took over the control for the island and converted it into a military base, intended for the island to serve as a beacon of harbour defense. Around this time, USS Kanaloa accidentally sunk by friendly fire by the USS Walter Roy.

After the base was decommissioned, a portion of the island was petitioned to be nationally preserved and now serves as a home to the fictional White Tailed Towhee bird. A majority of the island was bought out by Maggie Adler. The remaining section eventually became a tourist area, serving the small amount of visitors that see the island. There were plans to build a museum, but these were eventually stopped by Maggie's efforts. Adler is the only permanent resident on Edwards Island, until her death three days prior to the game's beginning.

Ren mentions that in the 1950s, a tradition called "trawling" started on the Island in which bored army recruits would bring dates to the island. This tradition would eventually shape the annual Camena High School junior class overnight stay at the island.

Main Street is the only part of the island considered the "tourist trap" area of the game. There are a few kitschy shops and an information center. A statue that honors the USS Kanaloa stands here. After a certain hour, the street and the stores are closed to visitors. There is one Adler Note in this area.

Where the party within the game is set to be located, the beach harbors a massive cave where odd radio frequencies can be tuned into and heard. The stairs on the right side of the map lead up to the Adler Estate, however this does not exist in Alex's flashbacks. There is one Adler Note in this area.

The only true house in the area, the Adler Estate is the home to Margaret Adler, who owns the majority of the island. The house was built after the USS Kanaloa sank, so that Margaret could stay on Edwards Island to protect those who may accidentally come across the Kanaloa crew.

Crossroad in the game that connects various areas. The bomb shelter that leads into the cave resides here. There is also a statue here that honors Lt. Peter Hasborough. There are two anomalies in this area. There is one Adler Note in this area.

Named after Richard Harden, the Communications Tower is surrounded with an electrical fence that deters people from climbing onto it and falling off. It has equipment inside, but requires various codes in order to be used. There is one Adler Note in this area

A colonel station in Fort Milner, Tim Rustle, formally petitioned to have the woods federally protected. It is now a bird sanctuary, home to the fictional White Tailed Towhee bird. A 400 year old tree resides here as well, with a trunk that points true north. In game, it is a necessary path to access the Bridge Stand. There is one anomaly in this area. There is one Adler Note in this area.

The Bridge Stand has a cable car system that allows access to the Camp Grounds, and is where the Catbird station is. The Catbird station is the first check for the call and response system. The Pacific Northwest's smallest Cemetery sits under the bridge of the cable car system. There are two anomalies in this area. There is one Adler Note in this area.

A necessary path in order to access the Relay point from this direction. There are tents left in the campgrounds and areas that can be used for camping. Nona is found here after tuning into the cave. There are two anomalies in this area. There is one Adler Note in this area.

The first well on the island is stationed here. The Way Station is here as well, originally placed for mining purposes, and is where Ren is located after tuning into the cave. The Relay Point is accessible from Fort Milner, but only after Ren is saved. These is one anomaly in this area. There is one Adler Note in this area.

Separated into three sections in the game, the Facilities, U.S. Army Recs, and the Outpost. Clarissa is found here after tuning into the cave. It is an abandoned military fort that once housed the U.S. Army Radio Communication School, originally used to train troops in broadcasting and telecommunication. There are three anomalies in this area. There are three Adler Notes in this area.