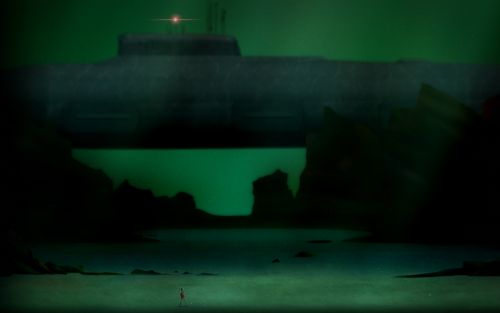 The USS Kanaloa, moments before imploding.

The USS Kanaloa was a WWII submarine that was sunk by the USS Walter Roy via friendly fire on October 25th, 1943, sending 97 people to their demise.

The USS Kanaloa (Kah-na-loa) was named after the Hawaiian god of the sea (also the god of death and darkness in Hawaiian mythology). It was first launched on January 15th, 1941, and commissioned later the same year under Lt. James Earl Platman.

The submarine contained an experimental nuclear reactor in its belly and was sent out a few weeks before its sinking to test the reactor's capabilities.

On October 25th, 1943, the Kanaloa sent out a garbled distress signal which was picked up by Maggie Adler, the comms officer on duty in Harden Tower the day the Kanaloa sunk. She mistook the message as an attempt to jam radar, which led to her following the guide book recommendations and signaling for surrounding ships to scout and bomb if needed. The USS Walter Roy responded and fired upon the USS Kanaloa, sinking it and seemingly killing its 85 crew members and 12 passengers onboard. It is the regarded to be the only submarine casualty in American waters.

The event was eventually covered up, as the guided tour station plaque located on Main Street near the propeller monument will state that the USS Kanaloa was sunk by a Japanese sub chaser named Tokisada on October 28th, 1943, approximately 25 miles off the coast of Washington.

It is later stated that the Kanaloa's propeller was recovered in 1962 and erected as a monument on Main Street on Edwards Island in 1965.

Fate of the Kanaloa's Crew

The crew of the Kanaloa did not, in fact, die, as is commonly believed, but instead were separated from their dimensional existence by the implosion of the submarine's nuclear reactor.